First, here are some gimmicks that would have been familiar to cigarette manipulators. 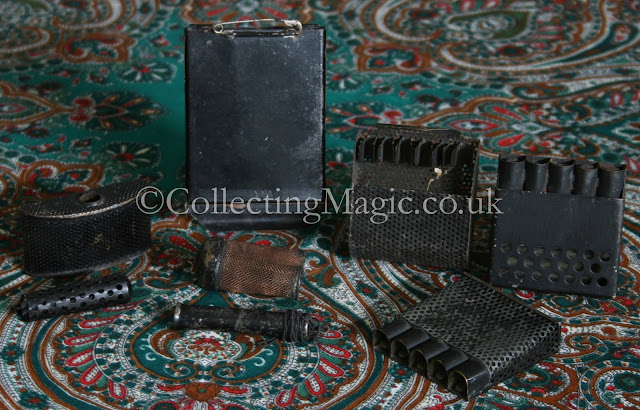 All of these would be used by the magician without ever being seen by the audience, assuming all goes to plan. The large dropper at the back was manufactured by the Australian magician Alma, the other items are from a variety of suppliers.

Davenports had a section devoted to cigarette tricks in many of their catalogues, below are some of their items used in cigarette manipulation.

On the right is a 1930s cigarette box which allows you to produce cigarettes from the air one at a time and drop them into the box until it is full. It appears utilitarian but contains quite a complex mechanism. In the foreground are two cigarette pulls, the larger one allows a cigarette to be changed into a silk. The boxed items are all cigarette catching gimmicks, probably the most widely produced cigarette trick.

Davenports also made a special cigarette holder that allowed the instantaneous production and vanishing of a cigarette.

This was most famously used by the superb manipulator Cardini. His act combined many forms of manipulation and was notable for being performed with gloved hands. Unlike Deveen in the previous post Cardini had a hugely successful career, performing on the best circuits. 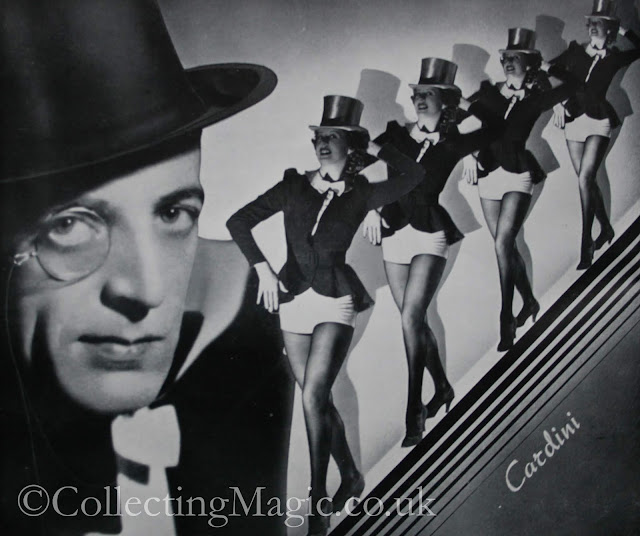 This image is a full page from a variety programme for the London Palladium in 1937.

Cigarette magic wasn't just used in manipulation acts though, it was perfect for close up. At a time when cigarette smoking was widespread, they were just as useful as coins for performing pocket tricks. Alongside sleight of hand effects with cigarettes dealers produced apparatus such as the Davenports examples below. 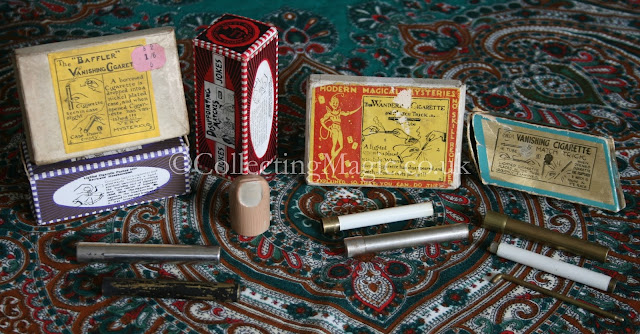 On the right are two tubes that allow a lit cigarette to turn into a match, these are beautifully engineered, probably in Germany. The tube on the bottom left allows a real cigarette to vanish from a tube using the Baffler Box principle, hence the name "Baffler Vanishing Cigarette".

Cigarette effects have naturally declined as smoking has gone out of fashion, but the gimmicks and sleights can still be applicable to similarly shaped objects today. It's interesting to look back at how many cigarette effects were available that simply would not work in a modern magic act. Effects using pipes and cigars were also popular, but I'll leave that for another post.
Posted by Philip David Treece at 07:00
Labels: Cigarettes, Davenports, Germany, Manipulation, Metal, Packaging, Photo, Plastic, Programme, Wood
Newer Posts Older Posts Home
Subscribe to: Posts (Atom)