A Haberdashery of Hocus Pocus.

Magic is always most effective when done with familiar objects. Due to this, tricks from specific periods can demonstrate which objects were commonplace at that time. Though sewing's a popular hobby today, when clothing was more expensive repairing clothes was an everyday necessity. This meant the tools and materials needed to do this were in every household.

Houdini famously swallowed loose needles and thread before regurgitating them, the needles now threaded. Thimble manipulation and pocket tricks with thimbles were also popular. This post looks at three effects, marketed in the 1930s by Davenports, centred around things that might be found in a sewing box of the time. 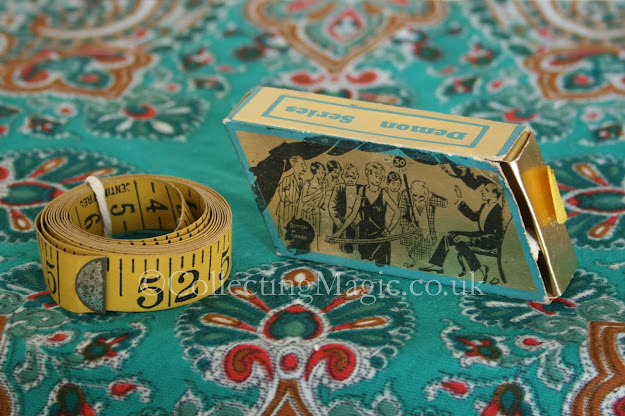 This simple linen tape was produced by the German firm Bartl, whose artwork is reproduced on this Demon Series box. This tape is part of an effect where a strip of paper is measured before four inches are torn off. The conjurer magically restores the paper to its original length. Most spectators would not suspect such an everyday object like a linen tape could carry a secret.
One effect that Davenports manufactured themselves was called Bewildering Buttons, described in their advert below. 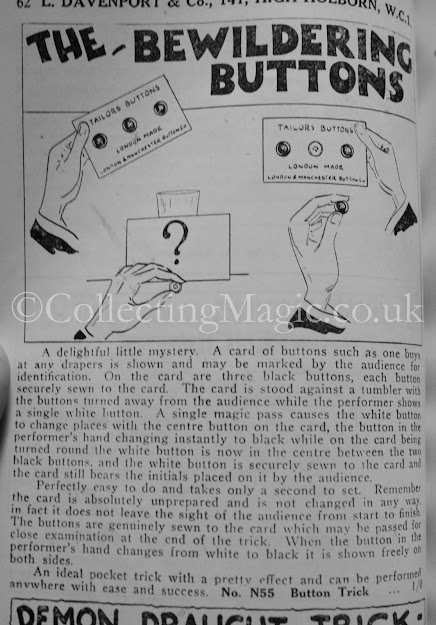 This was a truly charming effect where a button securely sewn onto a card would magically swap places with one of a different colour. The method is really superb and would certainly be used today if such cards were still commonplace. An example of one with red and black buttons is below: 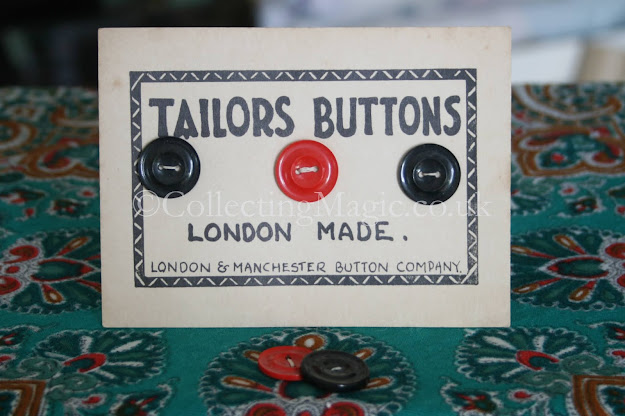 At the same time as Bewildering Buttons Davenports were also selling an effect called the Three Reel Mystery, though this was a lot less popular judging on how many survive today. In this trick, three reels of different coloured thread were placed onto a small wooden rod which ran through their central holes. Under the cover of a handkerchief, while the rod was held on each end by a spectator, the central reel of the three magically passed through the rod. All of the reels and the rod could then be examined by the onlookers. 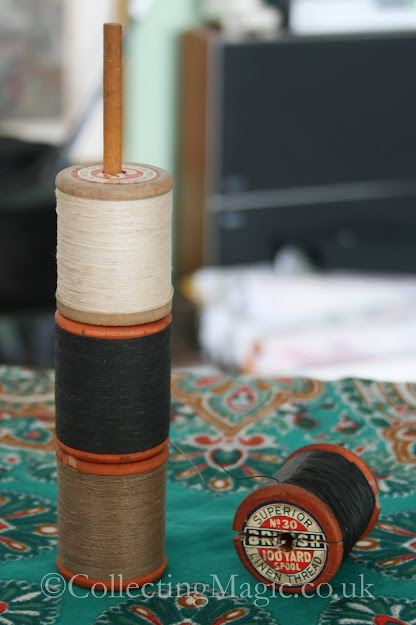 All of these tricks would have resonated with a 1930s audience and the top two of the above were sold by Davenports for many years after. Today they would appear unusual in a contemporary act and effects with thimbles are similarly rare to see performed today. The accoutrements of sewing can be found in dozens of magic books and catalogues of the past. It's a curious side effect of today's throwaway fashion culture that they have been consigned to the history books.
Posted by Philip David Treece at 07:00
Labels: Advert, Blands, Davenports, Germany, Houdini, Packaging, Paper, Wood
Newer Posts Older Posts Home
Subscribe to: Posts (Atom)