I'm currently writing an in-depth book on the history of the Ellisdon family and their famous joke and magic business. It's set to be released later this year through CollectingMagicBooks.com.

To mark this announcement I thought I'd take a look at some classic joke shop staples, appearing snakes.

The most famous incarnation of these was created in 1915 by the goliath of the American novelty world, S. S. Adams. He created the Snake Nut Can, an innocent-looking tin of nuts which, when opened by the unsuspecting victim, released a huge green snake. Here's a 1950s model. 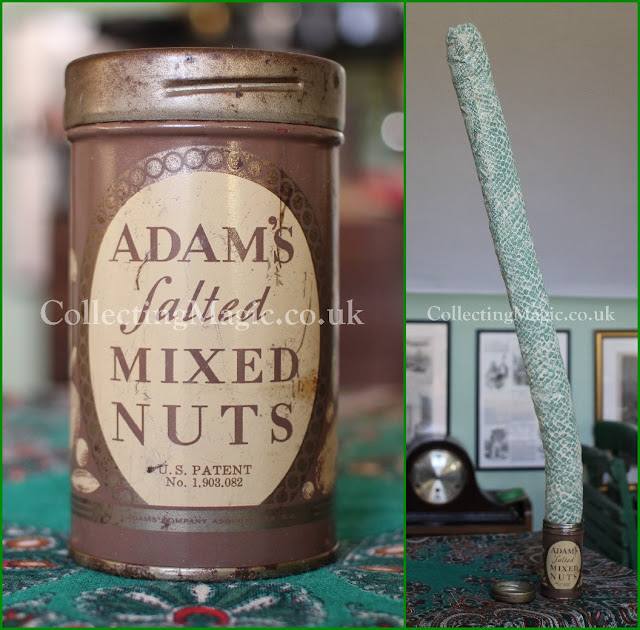 Though Adams' can was certainly the most successful use of this idea, his invention was really a variation on an already popular theme, rather than a true original. The first adverts I have of a joke appearing snake are in a Hamleys catalogue from around 1900. One is a spring snake from a playing card box and the other a spring German sausage from a pouch of tobacco, both almost certainly imported from Germany. 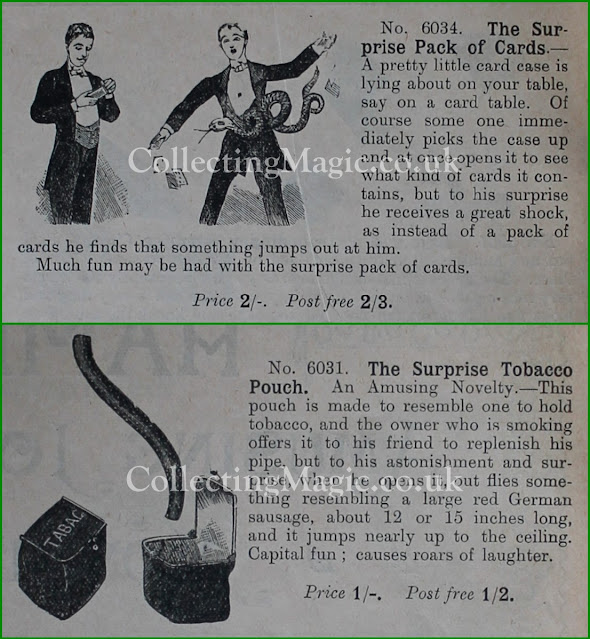 Over time the most popular form of the joke sold in the UK used small pots of jam, mustard or face cream. One of these early glass jars can be seen below. 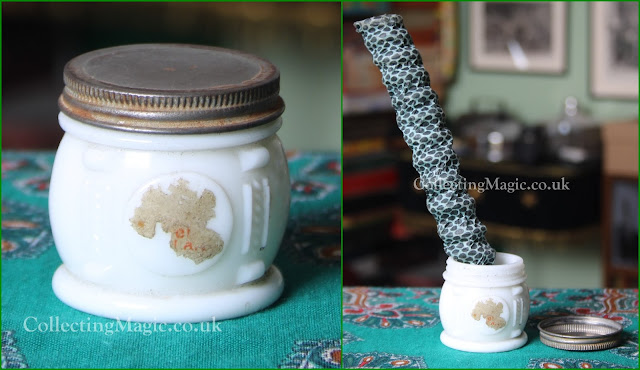 These two adverts from Davenports show how the joke was marketed from the inter-war years onwards. The distinctive pattern of the jar above can be seen in the advert on the left. 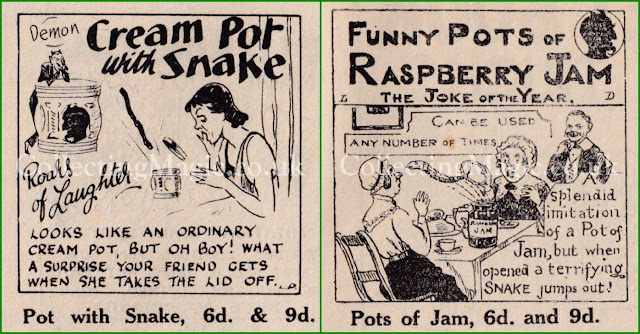 The German and Japanese manufacturers ran with this joke in a big way creating many variations. Snakes would pop out of practically any object which could accommodate a spring snake. One of the simpler tricks was this shaving brush canister. 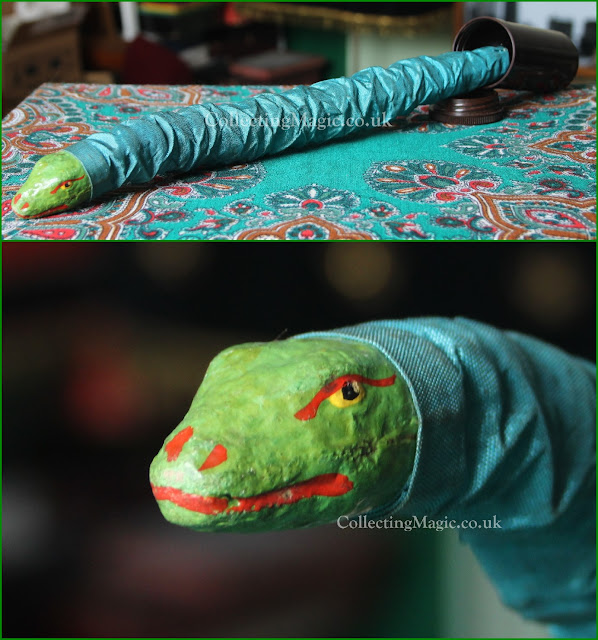 Many of these early versions have charming hand-painted faces. To give an idea of the huge variety of snake jokes on offer, here is a page from the German firm Carl Quel's 1937 wholesale catalogue. 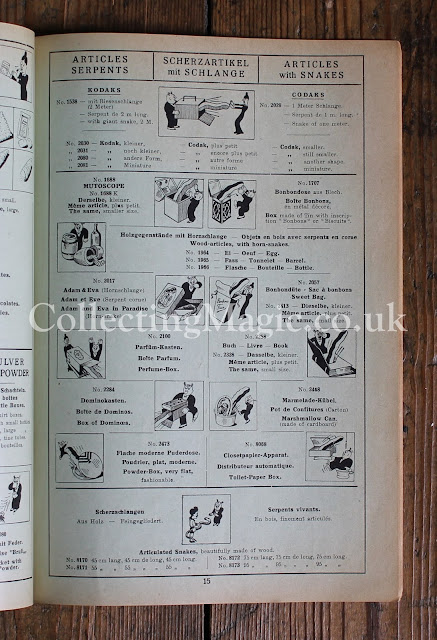 The top advert shows one of the most complex of the snake pranks manufactured, the snake camera. This looks like a real 1930s camera, complete with bellows, but fires out a snake when the joker pretends to take a photo. 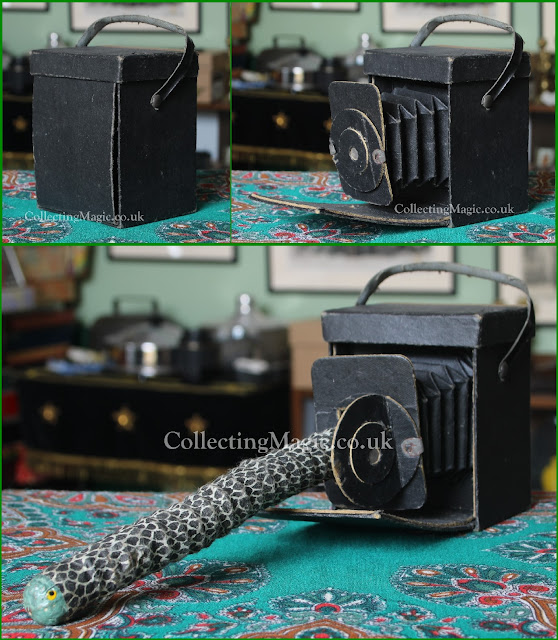 The London joke firm Ellisdons found particular success with a fake book aimed at tempting the onlooker to have a sneaky look. 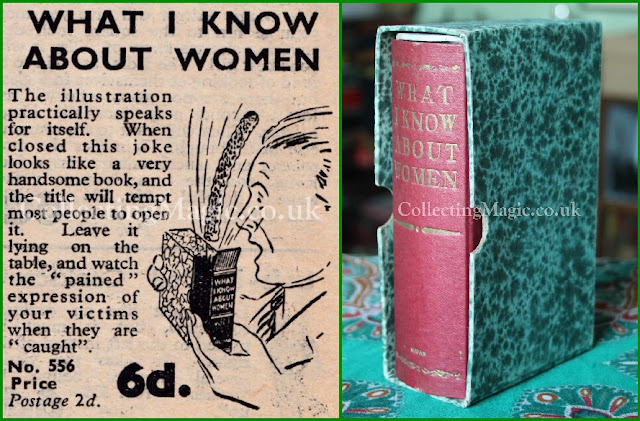 The advert above, from their 1937 catalogue, shows what would happen to the victim when they attempted to read What I Know About Women. These were also fitted with a spring-loaded noise maker which emits a loud squeak when the snake escapes. 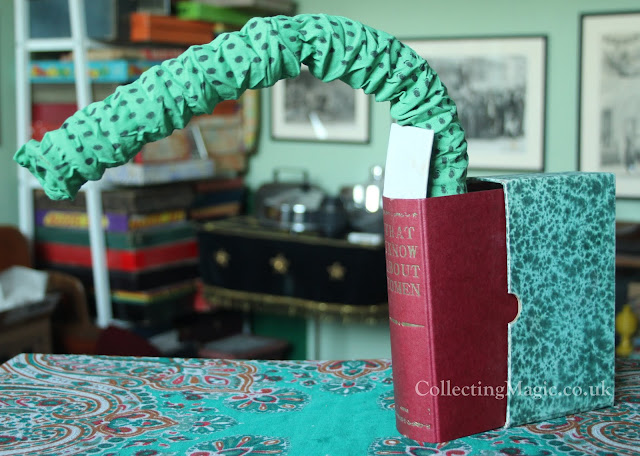 These pre-war models were imported from Japan by Ellisdons. During and after World War Two they manufactured them themselves, selling them in large quantities through Woolworths and via mail-order.
Pre-war Japanese snake tricks were carefully crafted in card and paper and would have effectively duped many victims. Most simply carry the word "Japan" or "Foreign" but a few have makers marks such as this trick harmonica case. I haven't yet been able to confirm which firm used this mark. 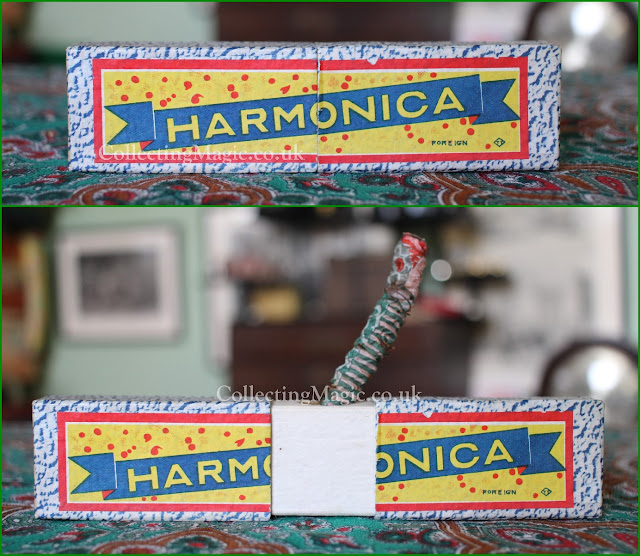 The smallest items I've found which incorporate a spring snake are these two Japanese lighters. 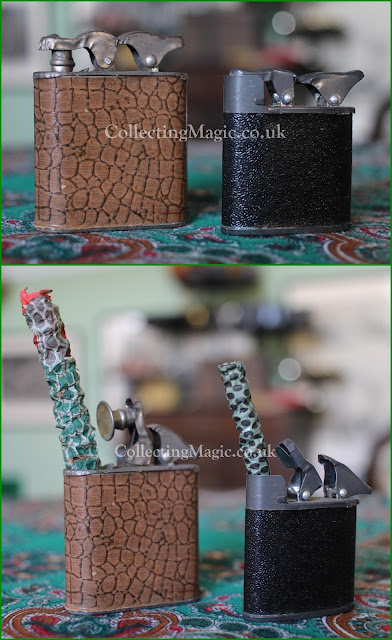 The lighter on the left has a cloth snake while the one on the right has a cheaper waxed paper one. The most popular of the snake tricks remained the jars and cans though. The Japanese ketchup jar below has a painted red interior to represent the ketchup and hide the spring snake and sprung squeaker within. 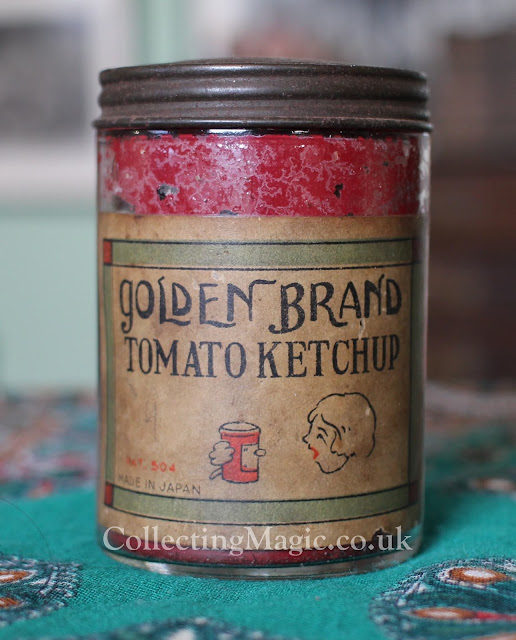 As with most novelties manufactured in Germany and Japan, particularly those fiddly to make like the above, the Second World War saw the end of their manufacture. The huge variety of snake jokes didn't return after novelty manufacturing resumed in the mid-twentieth century. Spring snake novelties are now confined to cheaply made plastic snake cans which would arouse suspicion before opening, providing merely a shadow of the original joke.
Posted by Philip David Treece at 07:00
Labels: Advert, Davenports, Ellisdons, Germany, Glass, Hamleys, Japan, Jokes, Novelty, Packaging
Newer Posts Older Posts Home
Subscribe to: Posts (Atom)