Smaller and Smaller, a Look at Diminishing Effects.

A theme that pops up quite often in the old catalogues is the idea of an object gradually shrinking before vanishing entirely. Perhaps the most popular of these tricks, and one regularly performed today, is the diminishing cards.

In this effect a group of cards is removed from a deck and fanned. The fan of cards then decreases in size incrementally before disappearing.

The set on the left is by Davenports, I'm unsure where the set on the right comes from. In both cases the largest card is the standard poker size, which gives an idea of how small the cards end up. The Davenports set is threaded together, allowing for more natural fanning than the riveted set.

A variation on this theme is the diminishing billiard ball, popular when billiard ball manipulation was common on the stage.

These two sets are likely from Germany. The left set shows the different sizes and the one on the right shows how the balls nest. 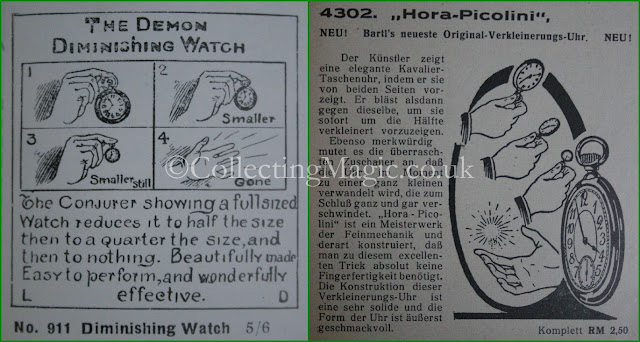 On the left is the Davenports advert for the effect, the right is a Janos Bartl advert. Bartl manufactured these watches in Hamburg. 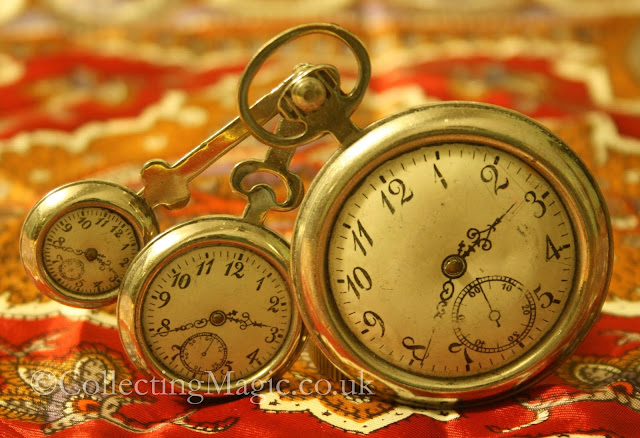 This set is beautifully made. There are small brass nubs in the centre of each face to ensure the printed faces aren't rubbed off when the set is opened and closed.

Here's an effect I'm going to shoehorn into this post, it's not strictly a diminishing effect. The trick, know as Multum In Parvo (a great deal in a small space) allows a quantity of milk to increase and then diminish again.

The unusual thing about this example is that, unlike most sets, it is made entirely out of glass. The gimmicks being specially blown for each vessel. I'm not sure who produced it, but the quality is superb. This doesn't have the kicker ending where all glasses are filled from the jug at the end, the milk is simply poured back from the jug into the smaller glass giving the effect of a sudden decrease in milk.