Houndsditch, The One-Time Home of the Novelty Trade.

Novelties and magic have been interlaced since the very earliest days of magic retailing. If you peruse a Hamleys catalogue from 1900 you'll find pages of jokes, novelties and puzzles between pages of the finest stage and parlour tricks available at the time. Some magic shops grew large enough to import these cheaper items directly from the manufacturers in Japan, America and Germany but others relied on purchasing wholesale from importers. In London, many of these novelty importers and traders found a home in the unusually named street of Houndsditch.

Located in the East End, Houndsditch was originally a defensive Roman ditch running along the outside of a portion of the city's wall. The route of the ditch's name is said to come from the 13th century when waste, including dead dogs, was routinely dumped in the ditch. The unpleasant story behind the street's name, and an association with crime, even led to an attempt to hold a referendum on renaming the street in 1908, though ultimately there wasn't sufficient support for the referendum to be held. The ditch was filled in the 1600s and quickly developed to become a street.

The newly available land on Houndsditch provided a blank canvas for Jewish immigrants who had been granted permission to settle in England by Oliver Cromwell in 1656. This community grew and became well-established in the East End. The area steadily welcomed Jewish immigrants over the next few hundred years but things changed greatly in 1882 following the accession of Tsar Alexander III. He created a wide range of laws persecuting Jews in Russia and many were forced to flee their countries. Two million went to America and 150 000 settled in Britain. Jewish communities across Britain worked hard to help support, home and feed their new neighbours.

It was this influx around Houndsditch that led to the sudden appearance and growth of many new businesses, with most in the area specialising in either clothing or novelties. Some of these novelty traders became long-established and successful but they left behind very little trace in the archives. A few had catalogues, some advertised in papers, but many more were purchasing their wares at the London ports and selling them directly to shops and hawkers with little or no paper trail. Some businesses were recorded in one form or another though.

Two postcards postmarked 1908 show the busy road. One is captioned: "Hounsditch [sic] The Famous Centre for the Latest Novelties." 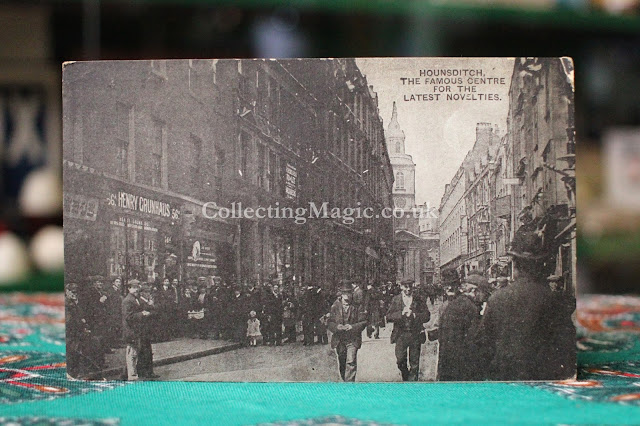 Though many shops are visible in the photo the only one which can be clearly seen is Henry Grunhaus. It is possible to just make out the words toys, dolls and fancy goods in the window. On the 1901 census Henry is listed as a salesman at a fancy goods warehouse, with his father Marcus listed as a fancy goods dealer. In this second photo we see Henry's brother's shop. 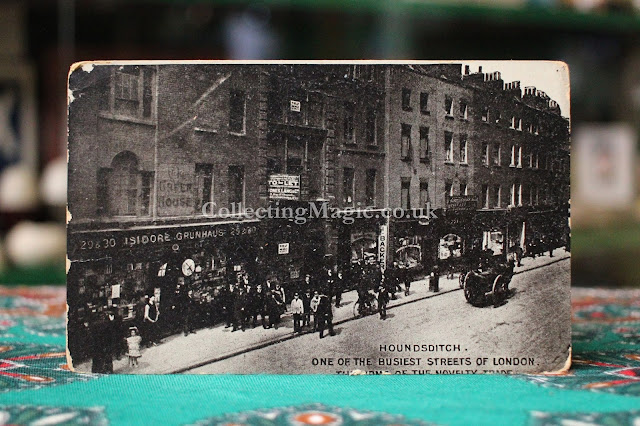 Isidore Grunhaus's shop is clearly at 29 & 30 Houndsditch, the original location of their father Marcus's shop according to the 1901 census. The caption reads "Houndsditch. One of the Busiest Streets of London. The Home of the Novelty Trade."  These two postcards were almost certainly commissioned by the Grunhauses themselves as they so clearly display their premises. The above example even has retouching to make the name on the shop clearer.

Another novelty wholesaler who left their mark was Richard Bercovitch. He put together wholesale lists of jokes and novelties from his shop named the A.1. Balloon and Novelty House. The use of "A.1." as a prefix was a common ploy at the time to ensure your business appeared at the front of directories. 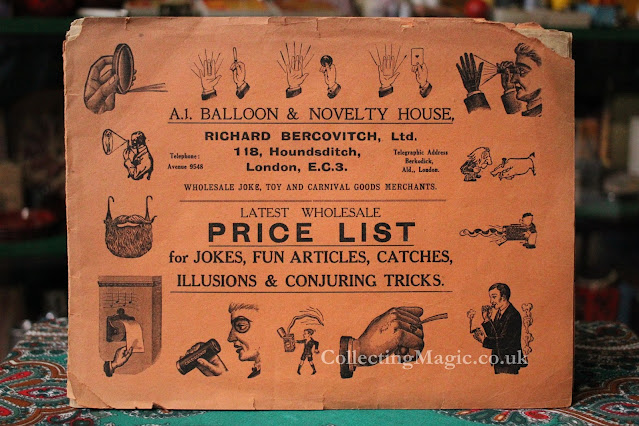 His 1920s catalogue reproduced images from a range of his suppliers from across the world and also had a few illustrations produced closer to home for his "Berco" range of jokes. 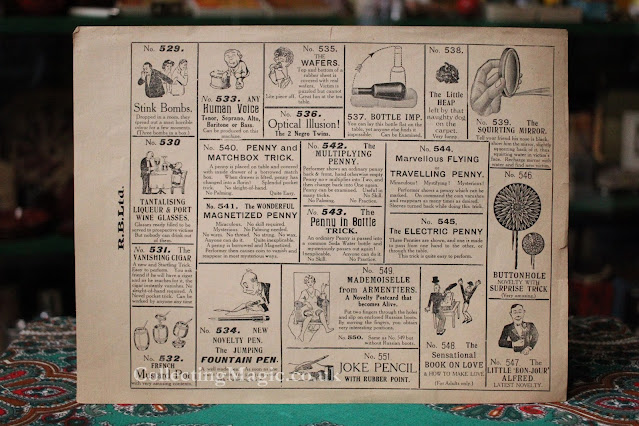 My sister site, CollectingMagicBooks.com, has just released a full reproduction of this catalogue, complete with a new introduction about Bercovitch and his business. For more information or to purchase have a look here: Richard Bercovitch, Ltd. Joke Catalogue.

For the most part, the Second World War saw the end of Houndsditch's association with the novelty trade. Hawkers selling novelties were no longer the norm in London and larger department shops, magic shops and toy shops were importing their goods directly from manufacturers or via agents in the country of manufacture. During and after the war there was a long period of shortages and restrictions which closed most options for novelty importers to find their goods abroad. A few shops lived on in Houndsditch, but it appears they did so by turning more towards traditional retailing and away from importing and trading. One survivor was W. Goldstein and Co. (not to be confused with the magic dealer Will Goldston) who ran a shop called the Army & Navy Novelty Co. A picture of their shop still thriving on Houndsditch in 1975 can be seen on the London Picture Archive here.

Today, Houndsditch has been sanitised into another London street of concrete-faced offices and the odd ground-floor restaurant. No buildings survive from the time of Bercovitch and the Grunhauses to give a hint of the community that once called Houndsditch home.