One of my favourite magic tricks masquerades as a puzzle, the imp bottle. This tiny bottle can be laid down on its side by the magician, but anyone else trying to push it on its side can't, the bottle pops back upright. Although it's presented as a puzzle, it's one the participant will never be able to solve as it is really a trick and requires a little extra something only the magician has.

An early description of this effect appears in Hoffmann's  Modern Magic as The Bottle Imps. He's clearly describing a dealer item already popular by 1876. He mentions that they can be made of papier maché or other light materials, though most are made of wood or, more recently, plastic.

Below are some in my collection in approximate chronological order. 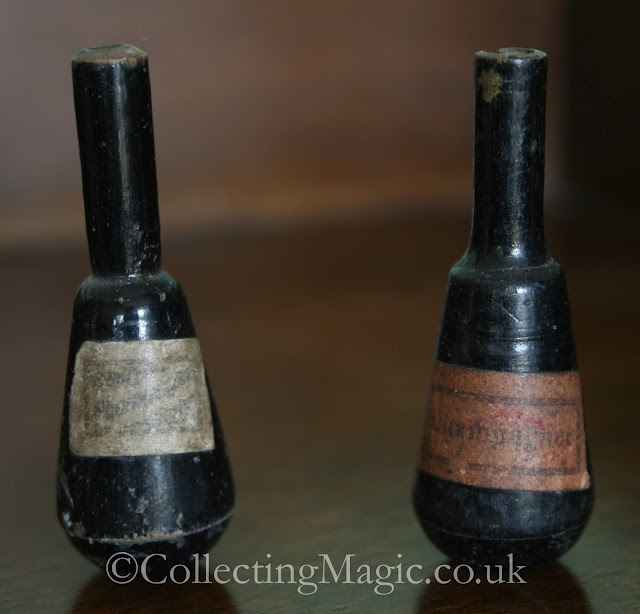 These examples were made in the 1920s by a German firm, most likely Kingl. They have small paper champagne labels and originally had painted gold collars. 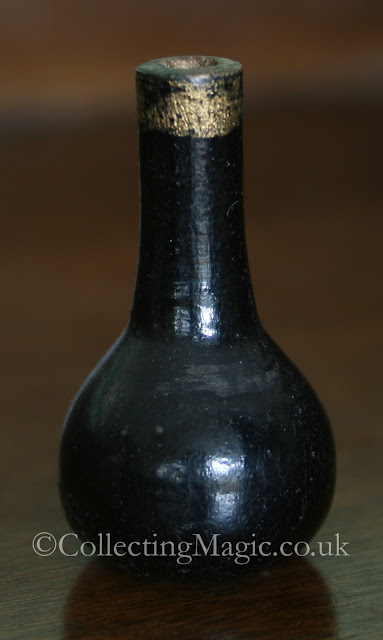 This example, probably also made in Germany, has a more bulbous shape and a flat bottom. Instead of wobbling around and settling upright like most bottles this has a very positive action. You can see the gold collar more clearly on this example. I think the reason the collar is so often rubbed can be explained by the handling used by the magician when introducing or removing the gimmick.

This later example is slightly larger than the above examples and much brighter. I feel the longer the neck gets in comparison to the bottle's body the more it points to the method, though it's still very deceptive. 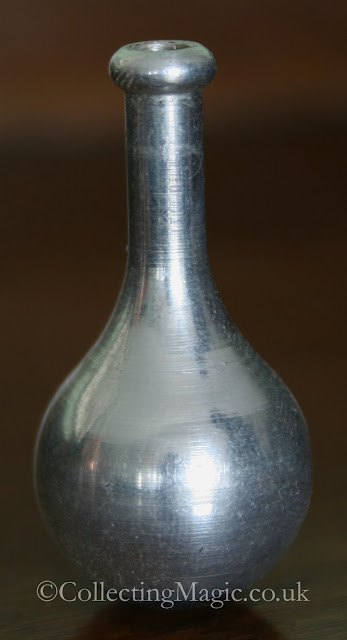 This item was retailed by Ellisdons from the 1950s. It's unusual in being completely of metal construction. This material only works here because the body is of light spun aluminium and the base the usual lead.  Here the bottle shape used in most modern plastic examples is introduced. 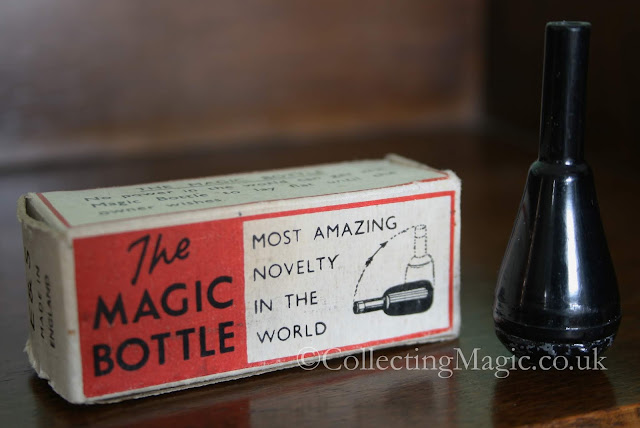 Ellisdons also retailed this example in the old shape. Although it looks similar to the wooden examples at the top of this article it's of plastic construction with a moulded lead base.

Below is a picture of these bottles together to show how their sizes varied:

The Imp Bottle is still very popular today, available as a pocket money item and as a toy in Christmas crackers. Unlike most cheap plastic items this effect is truly deceptive and introduces a small amount of sleight of hand instead of being self-working.
Posted by Philip David Treece at 07:00
Labels: Ellisdons, Germany, Hoffmann, Metal, Novelty, Packaging, Plastic, Puzzle, Wood
Newer Post Older Post Home