Jardine Ellis had a short and successful career as a magician, noted for novel and effective routines performed only by himself. As a creative magic mind, he made the decision early on that he would keep his effects to himself and resist the urge to market his secrets to fellow magicians. He was a popular member of many magic societies, attending gatherings of the Magic Circle and the Magicians' Club where he would baffle his contemporaries. The excerpt below, from The Magic Wand, describes Jardine Ellis at the 1921 Magic Circle Grand Seance. 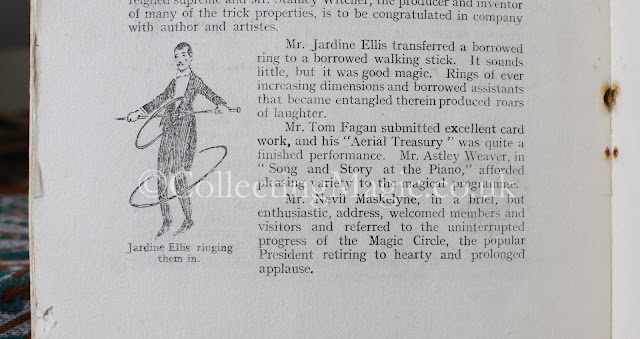 Born Duncan Lome Campbell in 1881, Ellis traveled the globe performing. His career was a short one as he died of pneumonia in 1923. His imaginative effects could have been lost forever had it not been for the actions of some of his fellow magicians, particularly George Johnson and Stanley Norton. 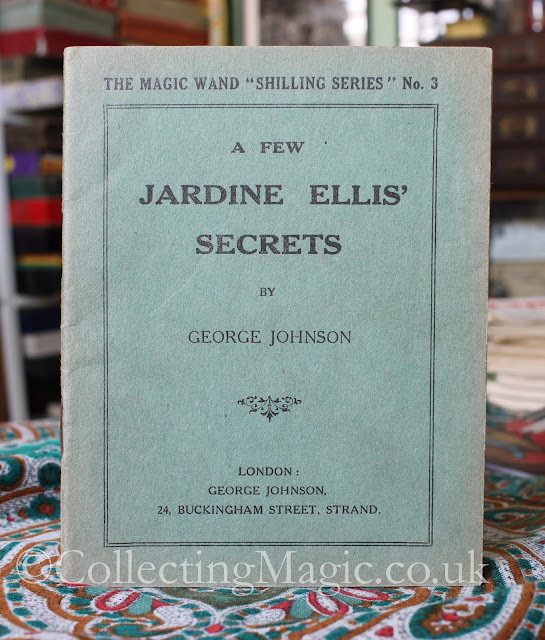 In the few years after Jardine Ellis's death, Johnson wrote up and published a selection of Ellis's tricks in The Magic Wand. Some magicians were offended by this, believing Jardine Ellis had made it quite clear that he didn't wish for his secrets to be shared or sold. George Johnson addressed this in the foreword of his book: A Few Jardine Ellis Secrets, a compilation of the effects previously published in The Magic Wand:

"This clever worker was at some pains to keep his secrets within a charmed circle and usually stipulated that his tricks were not to be either shown or exposed to a conjurer. I have witnessed many of the effects but for the majority of the secrets I am indebted to Mr. Stanley Norton who, by the way, has himself written the description of the Slate Mystery.

One day, while exchanging secrets - as conjurers are wont to do - Mr. Norton remarked to Mr. Ellis, 'You are very particular as to these effects; do you expect to keep them forever and ever?' Ellis laughed, 'Oh well,' he said, 'when I am gone it does not matter what becomes of them.'

I do not, therefore, feel any qualms about publishing this booklet."

It was very convenient that Norton recalled this conversation, excusing any future use of Ellis's secrets. Two of Jardine Ellis's, now public, routines really caught the attention of magicians. They are both still popular today. 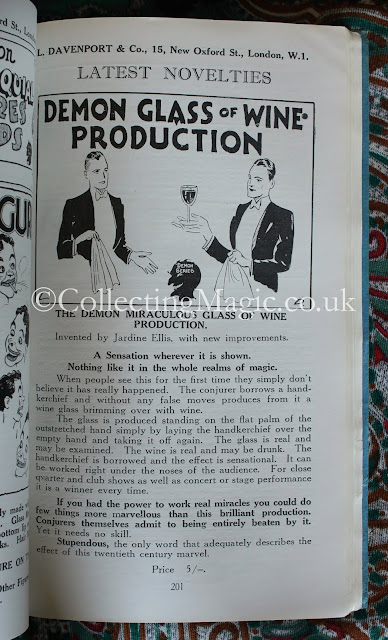 One of these was a clean production of a glass of wine using handling from Ellis's Thimble and Wine Glass routine. Davenports introduced two separate improvements to the effect, the first being advertised around 1933 (above). By the mid-1930s a second improvement had been made, which can be viewed on the left of the picture below. 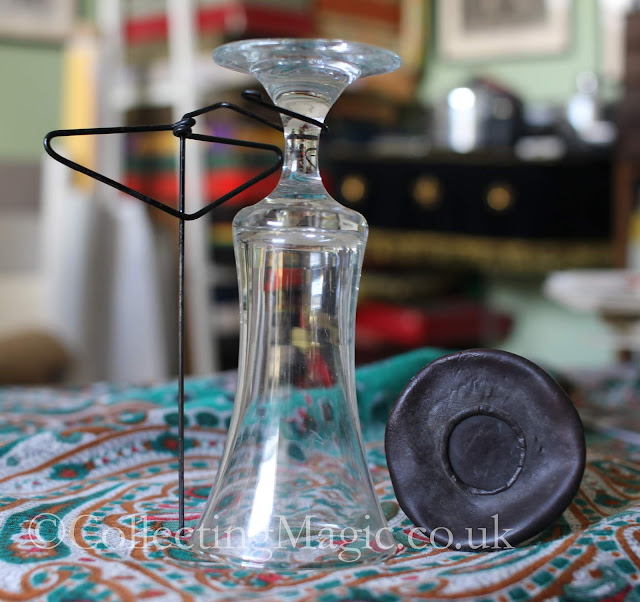 Despite this effect's popularity, Jardine Ellis's name lives on in a different routine of his, the Jardine Ellis Ring. This ring has become a true classic of close up and parlour magic. In Ellis's original routine, known as the Rod and Ring, the metal ring would magically pass through a walking stick. This was the effect that Davenports marketed from the early 1930s. One such ring is to the right of the photo below. 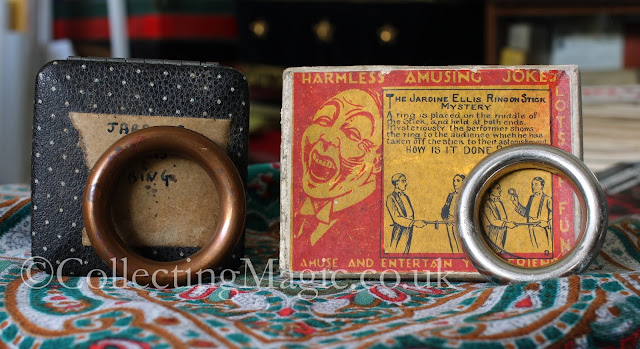 On the left is a larger copper ring of unknown manufacturer. These rings were extremely versatile and could be used for many effects beyond the ring on stick effect. As such, they became a favourite of magicians with many new routines invented with the prop. Perhaps the most significant of which are those by Hans Trixter, published in Conjuring Trix and Jardine Ellis Ring Effex. The booklet was published by Magic Wand in 1955, now under the management of George Armstrong. Jardine Ellis Rings are still available to buy from magic shops and are even included in some toy magic sets, such as those manufactured by Hanky Panky Toys.

It's hard to say whether Jardine Ellis would have been happy with his effects becoming a part of many magicians' repertoires. Either way, it's clear that the use of his name to market his tricks, in particular the Jardine Ellis Ring, has kept his name in the minds of magicians almost a hundred years after his untimely death.
Posted by Philip David Treece at 07:00
Labels: Advert, Book, Davenports, Glass, Manipulation, Metal, Packaging, Profile, Publishers, Stage
Newer Post Older Post Home