It's no secret to those who read this site that I love the world of novelties and jokes. It's easy to overlook that many of our most successful magic shops and manufacturers were propped up by selling and making these more frivolous things. Many pocket money pranks were imported from Germany, Japan, Hong Kong and China but there were British manufacturers too. Some are fairly well known, such as Ellisdons, BeePee and Brownings, and some barely recorded. I recently fell down a rabbit hole trying to identify the manufacturer of this charming compendium of practical jokes. 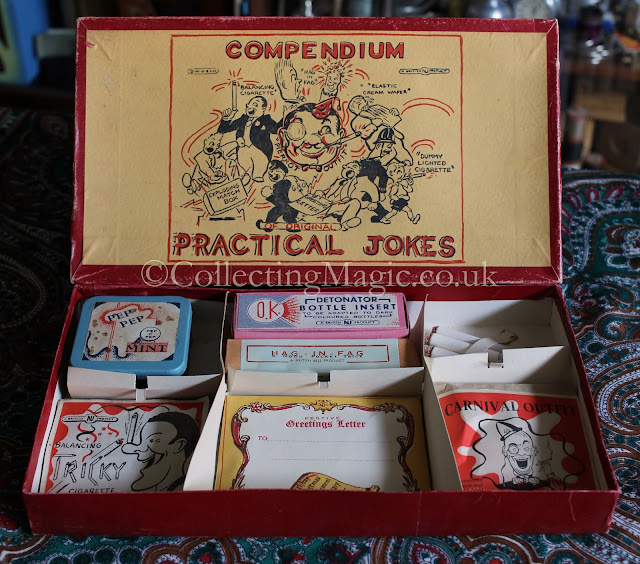 On the face of it there seem to be plenty of clues to the manufacturer of this set. There are two trade names used throughout the packaging: "D. H. V. and Co." and "N. U.". Thanks to the wonderful Davenport Collection website the pieces began to fall together. In their collection, they have two joke greeting cards, one with the "N. U." branding, and one very similar branded "Klawvana". Here's a similar card from the set above. 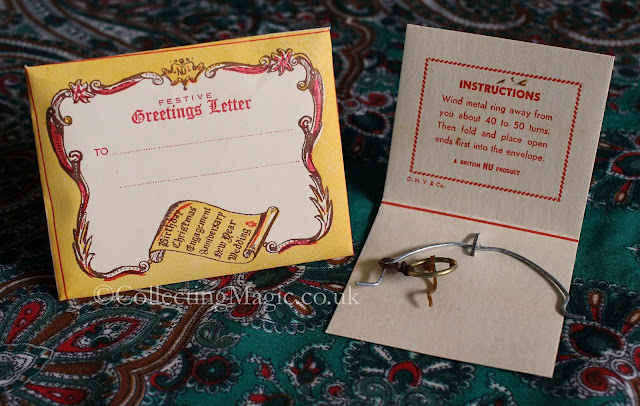 The Klawvana branded card has an unusual logo of a woman and a greyhound, the same as on this exploding compact trick. 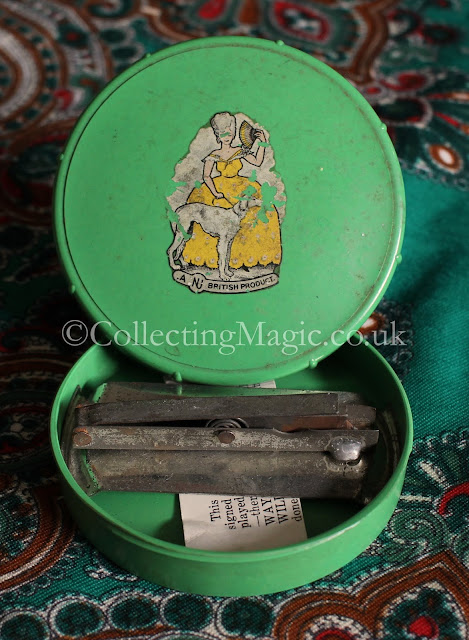 The compact is not branded Klawvana though, it is an "N. U. British Product". This suggests N. U. and Klawvana were one and the same, explaining the similarities between the two joke greetings cards in the Davenport Collection. As luck would have it, I remembered seeing the word Klawvana on a novelty recently, a trick butterfly that would fly out of a closed book. 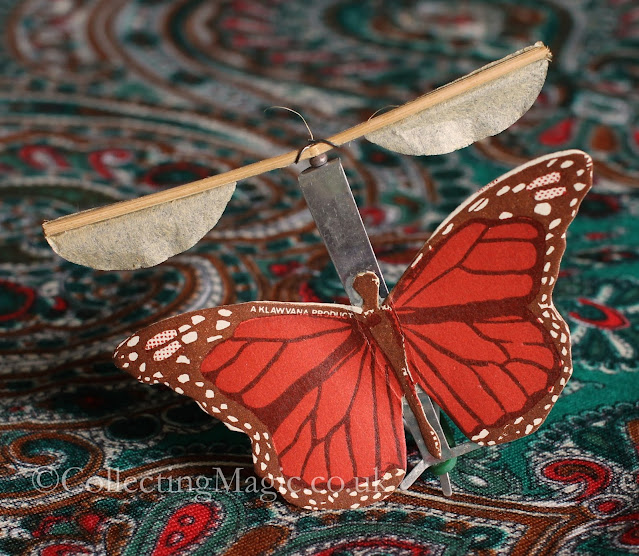 This novelty was a huge success for the U. S. firm S. S. Adams, who patented their version in 1932. As a side note, the patent number printed on Adams' butterflies was always the incorrect "1858538" rather than the actual patent number: 1858535. Looking at British Klawvana butterflies, the early models are listed as patent-pending and the later have a number corresponding to this patent first applied for in 1962. The applicant for this patent was Jack Klaw, who by the time of this application had been manufacturing and selling wholesale into the joke and magic community for at least twenty-two years.

Searching for Jack Klaw in the magic press brings up no leads, but he does appear in an issue of The London Gazette from February 1940.

From this, we can see that Jack Klaw and Paul Clive were in partnership manufacturing toys under the name Novelties Unlimited. The previous year, thanks to the 1939 Register, we can see both Clive and Klaw were living in separate houses in Andover, with Clive listing his profession as "Jokes and Magical Dealer" and Klaw recording his as "Toy Manufacturer". It seems that when Paul Clive's magic dealership took off and moved to London the two men went their separate ways. 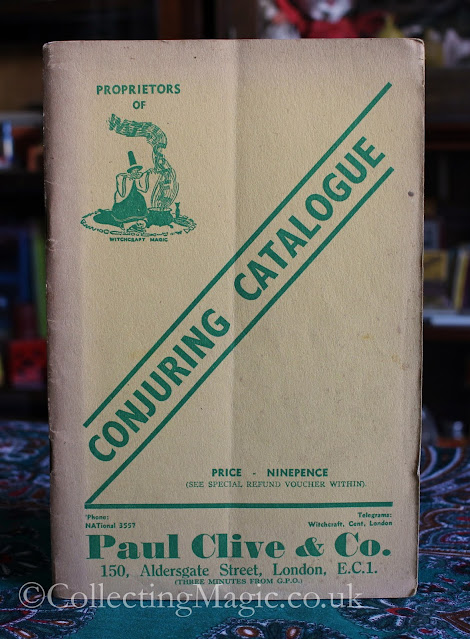 Jack Klaw continued to use the name Novelties Unlimited, abbreviating it to N. U. on his products. It looks like Klaw's business was strictly wholesale as he doesn't appear to have advertised to the public.
Jack Klaw was born in London in 1904, shortly after his parents arrived in the UK from Russia. He was born Jacky Klawansky, but he and his eight siblings anglicised their names to Klaw, some officially, some unofficially. Very little is known of Jack's life but his route into magic possibly came from one of his older brothers, Harry. Like Jack, Harry Klaw doesn't appear in the magic press, but he was a working magician in the 1920s and 1930s. Harry posted a handful of adverts in The Stage across these decades offering conjuring entertainments at home. In these he always described himself as a "Card Wizard" and sometimes used the phrase "a pack of comedy". He performed magic to supplement his income as a shopkeeper, but sadly it has been impossible to identify what he sold from his shop. Perhaps it was Harry's interest in magic that lead to Jack's career supplying magic shops with jokes and tricks.
Returning to the joke compendium, the pranks centre around two main themes, cigarette tricks and detonators. It seems these were the core of Klaw's products as in the 1961 Kelly's Directory his firm is listed in the Smoker's Requisites and Cigarette Tubes sections in addition to the Toy Manufacturers section. The set includes cigarettes branded N. U. and ones with the State Express 333 logo, a real cigarette company. 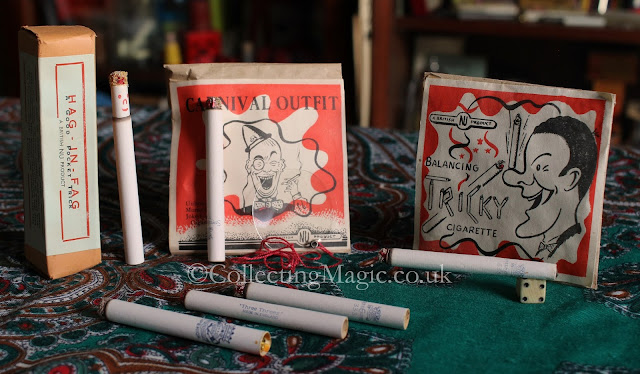 There are also two detonator based tricks, a "Pep Pep" mint box and a bottle insert. The generic instructions for both of these show that an exploding match box and exploding "Nushine" boot polish tin were also available. The design for the N. U. Detonator was registered under the number 842155 in 1945, and each detonator is stamped with this number.

The detonators are heavy-duty compared to the cap detonators more commonly found in trick items. The "Pep Pep" tin also has a mini list in the lid titled "What Gives Spice To Life?" which shows the company also sold a dribbling glass and scent bottle. Despite the inclusion of this advert in the set, there is no clue as to where an individual could order these items from, again suggesting N. U. was exclusively wholesale. 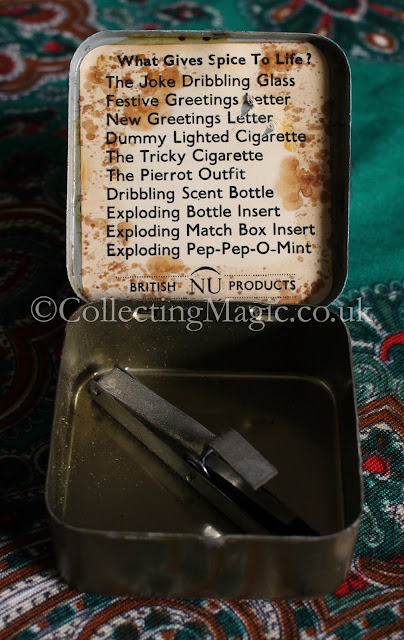 This set probably dates from the late 1940s and is one of only two I've seen. In 1954 Jack's youngest brother, Joseph, died and Jack sought buyers for his late brother's watch repair business. It is possible that Joseph manufactured and/or designed the detonators sold by Novelties Unlimited. Around 1961 Jack moved his business to 395 Hornsey Road in Islington. From here it appears he moved away from the complicated printed packaging and concentrated predominantly on manufacturing cigarette and match gags to be packaged and sold on by his customers. In the 1971 Kelly's Directory he describes the business as a "Toy Makers". From the box lid on the above set we can see he was selling rubber cream wafers, and rubber chocolates branded Klawvana were produced in the 1960s. 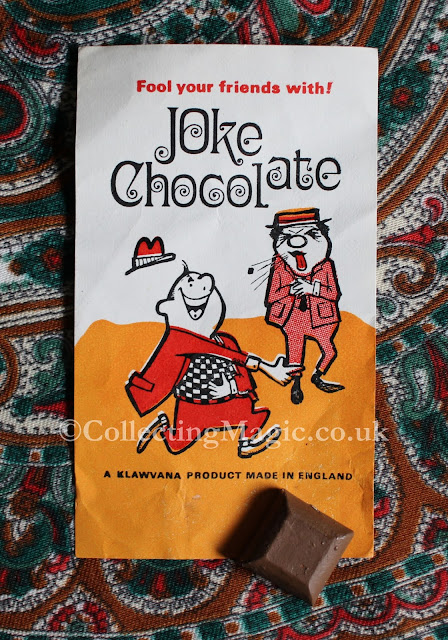 In 1975 Jack Klaw was heavily criticised in an opinion article published in the tabloid paper the Sunday People. Titled DEADLY, the article criticised Klaw for selling a magic trick in which spent matches could be lit again. Against the backdrop of a government campaign aiming to stop children playing with matches, a Cardiff fire prevention officer had requested the Home Office ban these matches, which he believed would be sold to children in joke shops. Klaw rejected these arguments stating it was the retailers' responsibility to keep these matches out of the hands of children.
The final sign of Novelties Unlimited I've been able to find is a listing in the Joke and Novelty Manufacturers section of the 1984 Kelly's Directory. They were still based at 395 Hornsey Road. This shows that, in one form or other, Jack Klaw was manufacturing and wholesaling tricks for at least forty five years. He died at the age of 87 in 1992.
Posted by Philip David Treece at 07:00
Labels: Cigarettes, Ellisdons, Ephemera, Jokes, Novelty, Packaging, Paper, Plastic, Profile, What am I?, Who am I?
Newer Post Older Post Home