Second Sight and the St. Clairs.

Second sight acts have been performed for hundreds of years but their heyday was the latter half of the nineteenth century. Though not always presented as a magic trick, many magicians performed second sight in their acts. The act generally consisted of two performers, at least one of whom was blindfolded, appearing to transfer thoughts between each other.

The classic acts, such as those performed by Pinetti and Robert-Houdin, consisted of one performer, generally the magician, holding up articles bought in by members of the audience and requesting the second performer, seated blindfolded on the stage, to describe said objects. Below is an etching showing Robin performing a second sight act in Piccadilly in January 1851. 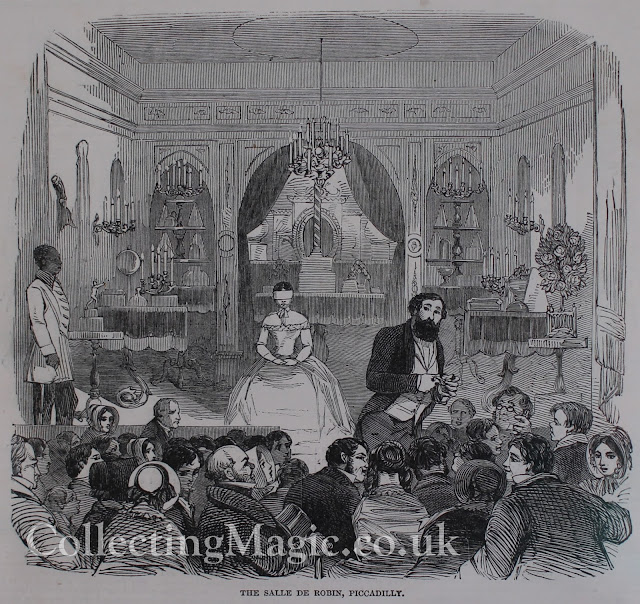 Second sight became hugely popular and many successful magicians introduced it into their shows. Though there were various ways of performing the effect, the most usual method required a huge amount of study and practice from both performers to effectively create the illusion of telepathy. There were also some technological methods, perhaps the earliest of which was Robert Heller's sofa, used between 1869 and 1875. 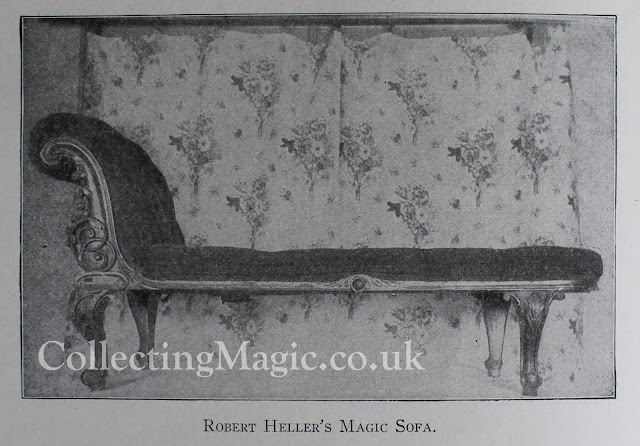 Pictured here in Henry Ridgely Evans' The Old and The New Magic, this sofa employed a secret that was quite revolutionary at the time.  The craze for second sight led to many lesser-known entertainers adopting the act. The secrets to performing second sight were readily available to those interested, Hoffmann having discussed them at length in his 1890 publication More Magic. There were even "penny dreadfuls" published on the methods. 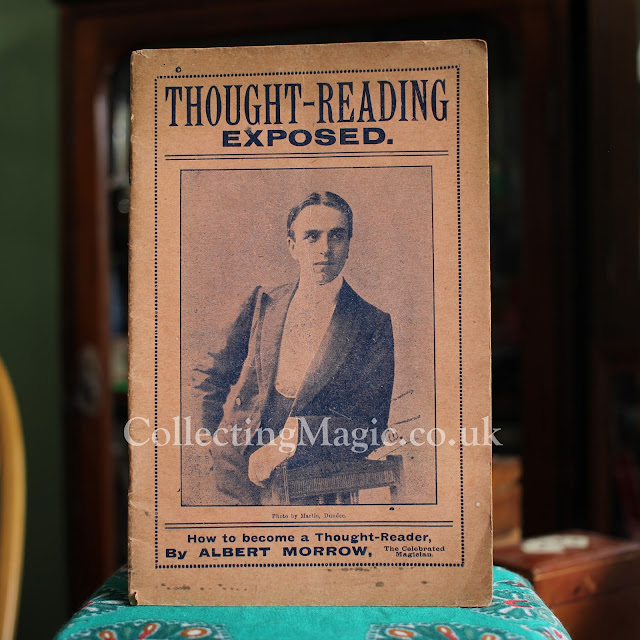 This book was published around 1909 by Manchester's Daisy Bank Publications who specialised in sensational crime books, magic books and fortune-telling books cheaply printed for sale on newsstands. The book was written by Albert Morrow, who worked at Munro's and founded the Mystic Club.
A seldom mentioned couple who performed second sight were the St. Clairs. This striking postcard shows the couple billed as "Second-sight Seers". 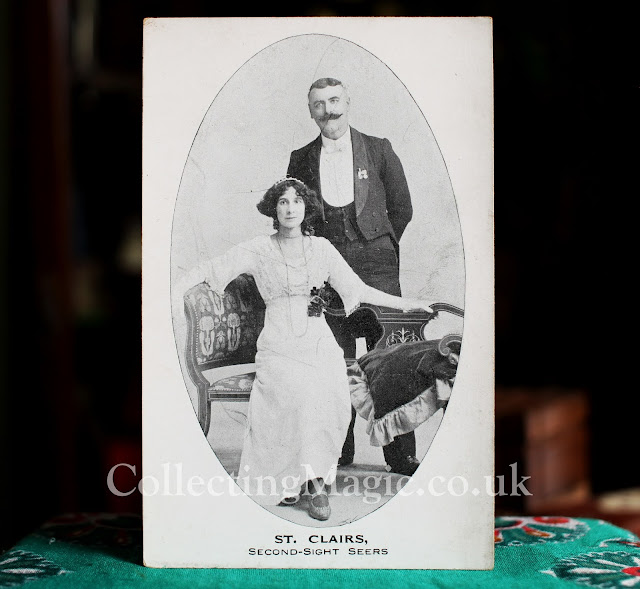 Researching the St. Clairs has been extremely challenging as they used stage names and only had moderate success. Beginning with what can be stated as fact, a second sight act called the St. Clairs was advertised for bookings from October 1905 through to June 1920. Throughout this period they were billed as "Roma and St. Clair", or some variation thereof, with the exception of one year, 1907. From August 1907 to the end of that year their billing changed to Ranee and Rajah and their act was performed in Indian costume and probably in blackface, sadly quite usual at the time. It is clear that Ranee and Rajah was the temporary name for the St. Clairs' act as they used the same descriptions for their shows and had the same address on their adverts: 38 Dawes Road, Fulham.
The act is described variously as "mystical double turn", "telepathic novelty", "modern mahatmas", "second sight seers", "telepathy up-to-date" and "mental mystery". Prior to 1907, adverts also mentioned that the St. Clairs had individual turns, Roma performed comic recitals and St. Clair had a lightning cartoon act. The core second sight act involved them playing cards while blindfolded and mystically transmitting the times set on large model clocks to each other. On longer billings, they used the names Mdlle. Roma and Mr. Kent St. Clair. St. Clair was generally described as the assistant to Roma.
As far as facts are concerned that's all that can be said about the St. Clairs with any certainty. There is no official record of a Kent St. Clair or a Roma St. Clair, so to learn more about the couple we must venture into conjecture. Having spent a great deal of time chasing up all of the addresses they listed in adverts and all entertainers using the St. Clair name during the period, I believe the most likely story is as follows. I think Roma was Alice Hughes, born in 1862 in Stockton on Tees and Kent St. Clair was James Hughes, born in Liverpool in 1857. This is how their names appear on the 1881 census, where James lists his profession as "Ventriloquist". In 1891 he lists his profession as "Conjurer and Ventriloquist" and still has the surname Hughes.
On New Year's Eve 1905, one of the Hughes' sons, also James (hereafter referred to as James Jnr. for clarity), got married in Liverpool. On the parish record the father of the groom is recorded as "James Chadwick Hughes" with his profession listed as "Entertainer". The groom's name, however, is "James William St. Clair Hughes". The groom works as a clerk. The addition of the name St. Clair to James Jnr.'s surname is an interesting one. James Chadwick Hughes didn't perform magic and ventriloquism under his own name, he preferred "Professor St. Clair". Through searching the British Newspaper Archive we can see this Professor St. Clair was an active entertainer from 1877, performing particularly to children in the Liverpool area. His act was a popular, if unadventurous, one that was much-loved in Liverpool. In J. F. Burrows's 1906 book, Programmes of Magicians, he describes it as follows:
"Prof. St. Clair.
Catching money in the air. Pass coins from one hand to glass tumbler held in the other. Sun and moon handkerchiefs. Handkerchief changes into a billiard ball. The knotted handkerchiefs untied on command. The dancing coin in a goblet. Answer to a sum appears on a slate. Cards passed up the sleeve. Diminishing cards. Banknote burnt and found restored in a candle. Cone of wood passed through hat. Cards and spring balls produced from a boy. Borrowed coin passed into an orange. Juggling tricks."
Around 1898 "Professor St. Clair Jnr." started appearing with and without his father, Professor St. Clair, performing a shadowgraphy act. In January 1907 the Liverpool Echo reported that Professor St. Clair had died suddenly. The obituary stated that St. Clair had performed to around two million children in Liverpool and the north and had a good career as a society entertainer which saw him perform in front of King Edward VII when he was Prince of Wales. Bizarrely it stated that the cause of death was "an affection of the throat, ascribed to irritation induced by the exercise of the ventriloquial voice."
There is a range of evidence that suggests the St. Clairs of the second sight act were Professor St. Clair and his wife Alice. It was not uncommon for entertainers to compartmentalise their acts, having one for family events, in this case Professor St. Clair's conjuring and ventriloquism, and one for more sophisticated society events, such as second sight. In the St. Clairs' adverts for their second sight act they give various London addresses for booking, but these all appear to be forwarding addresses. The only addresses outside London for the St. Clairs are in Liverpool, where we know Professor St. Clair and his family lived. 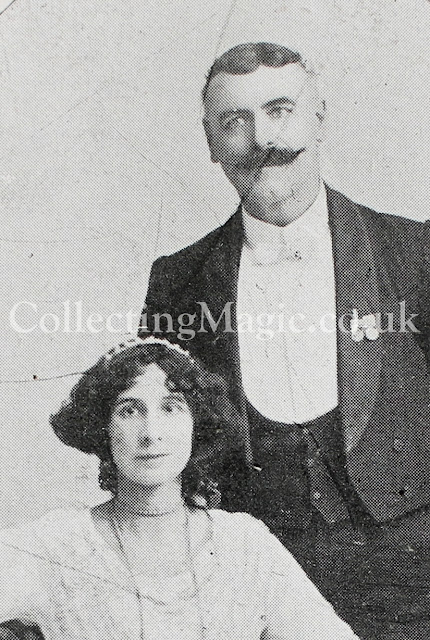 Perhaps the most striking pieces of evidence relate to how the adverts for the second sight act change at the same time as the death of Professor St. Clair. Up until December 1906 the second sight act is billed as "Roma and St. Clair" and regularly advertised. In January 1907 Professor St. Clair suddenly died and, at the same time, adverts for the St. Clairs second sight act ceased. When these ads returned in August 1907 they were billed as Ranee and Rajah, and didn't change their billing back to the St. Clairs until 1908. It seems possible, if not likely, that Professor St. Clair performed as Kent St. Clair with his wife Alice as the St.Clairs. Upon James Snr.'s death, James Jnr. needed to learn this complicated act to perform it with his mother. To allow them to practice while preserving the reputation of the St. Clairs they performed as Renee and Rajah, even changing their appearance during this period. Once the act was mastered by James Jnr. they began again as the St. Clairs in 1908. If this were the case, I would assume the postcard depicts the original St. Clairs before January 1907.
A further factor that supports the idea of James Jnr. following in his father's footsteps appeared in August 1909 when a new "Professor St. Clair" began performing magic in Liverpool. It's highly likely that this was James Jnr. We can see on the baptism records from December 1906 James Jnr. listed his profession as "Clerk", as he did on the 1911 census, but from a baptism record from January 1912, through to records on the eve of the First World War, he described himself as an "Entertainer". His mother Alice bought up James's younger siblings and worked as a maternity nurse. It seems probable James worked multiple jobs to support his recently widowed mother and his young siblings. On the 1911 census we can see Alice was living with two of her children, a fifteen-year-old and a nine-year-old. Alice died in 1937. It has not been possible to find out when James died, but his last performance as Professor St. Clair appears to be in 1942. For anyone interested in researching this further, it's worth noting the majority of the family adopted the surname St. Clair-Hughes from the 1930s onwards.
A few other magicians have performed under the name St. Clair, one lived in Bristol in 1914. Mark Raffles also used it as a stage name very early in his career. A Mdlle. Roma, who specialised in palmistry, also existed, though, like these two other St. Clairs, they do not relate to the performers above. It would be very satisfying to have a piece of categorical evidence that proved the Hughes family performed second sight as the St. Clairs but at the moment this is just a hypothesis.
If you have any information on the parties above I would love to hear from you.
Posted by Philip David Treece at 07:00
Labels: 1800's, Book, Ephemera, Hoffmann, Mental, Postcard, Print, Profile, Who am I?
Newer Post Older Post Home