Collect Your Tokens, Get Your Tricks.

Freebies, every box of cereal should have one. Used to encourage sales of all sorts of things, freebies of toys and gifts have been used for centuries. Often they require the collection of tokens, eventually redeemable for some prized trinket sent through the post.

Here's one such parcel, more or less as it would have arrived through the letter box in the mid 1930s. 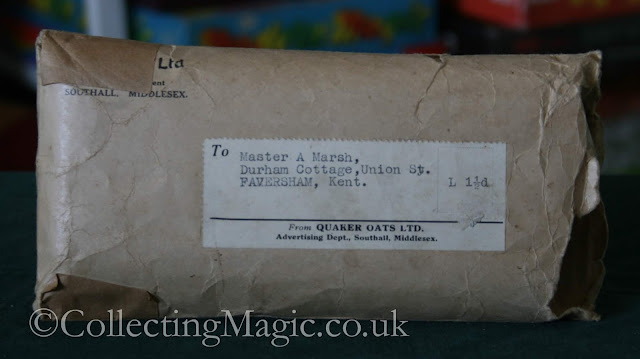 The envelope came from the Quaker Oats Advertising Department. I presume that to get this little parcel vouchers had to be collected and a bit of postage paid.

It was likely advertised as a free magic set, generally such giveaways were a bit exaggerated. The contents isn't  really a magic set, but would provide a good amount of fun to the budding child magician. 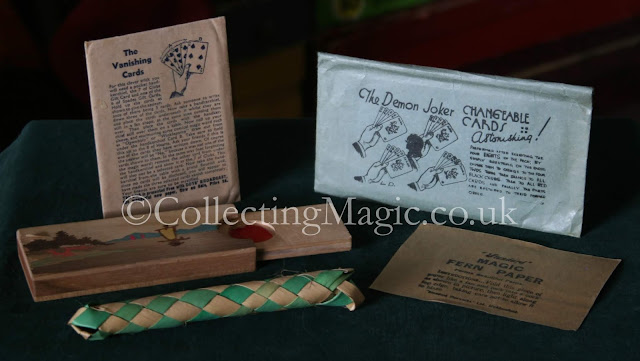 In it are a few Japanese imports, a coin slide and a finger trap, an indoor firework, miraculously un-burnt and two packet tricks. One of the packet tricks is The Vanishing Cards, made for Boy's Broadcast, an extremely short lived paper that run for less than a year from 1934. It's likely this stock was reused after the paper closed. The other packet trick is by Davenports, Changeable Cards. I'm not sure whether these would have been assembled by a dealer and sold to Quaker or if Quaker would source the contents in bulk from a range of sources.

Magic tricks were often used as giveaways, especially packet tricks, being small, flat and cheap to post. I intend to do a post on some of these giveaway items in the future.
Posted by Philip David Treece at 07:00
Labels: Advert, Davenports, Ephemera, Japan, Jokes, Magic Set, Packaging
Newer Post Older Post Home