Eggs have probably been used in magic for as long as magic has been practiced. Everyone's familiar with eggs, they're fragile and would seem difficult to manipulate. Of course the're also the perfect size to palm and flesh coloured, the fake ones aren't very fragile either.

The Egg Bag is the most widely used effect with eggs, a simple cloth bag and an egg are all that's used to create a truly baffling effect for the audience. Arnold De Biere is credited with creating the much-copied audience participation egg bag routine, here he is performing the effect in 1933.


Other notable performers who featured the effect in their acts included Max Malini and Horace Goldin. Bags were made by almost all dealers as they are so easy to put together, below are two early Gamages examples.

These come with decoy eggs produced for chicken farming. They are left in the coop and encourage the chickens to lay. This doesn't help the magician however, as they are very heavy plaster and painted gloss white, both a hindrance to performing the egg bag effectively. Gamages and others would sell lighter turned wood eggs as well though, before plastics took over.

Here are two more Gamages effects. On the left a very rare gimmicked egg that allows you to back palm the egg by placing it on your finger like a ring, the pink area sitting at the base of the middle finger. On the right is a hollow wooden egg used to change a handkerchief into an egg.

The item above left is plastic, a material that revolutionised magic props as it did for all sorts of more important things! Davenports threw themselves into plastics, perhaps most beautifully in their range of turned magic wands (more on that in another post). The plastic eggs Davenports made were superb quality.

They're made out of cellulose nitrate, the material used in ping pong balls (these are much thicker though). They are a perfect weight for an egg bag.

An unusual effect Davenports sold was this themoset plastic eggcup which allowed you to do a very persuasive vanish of an egg. 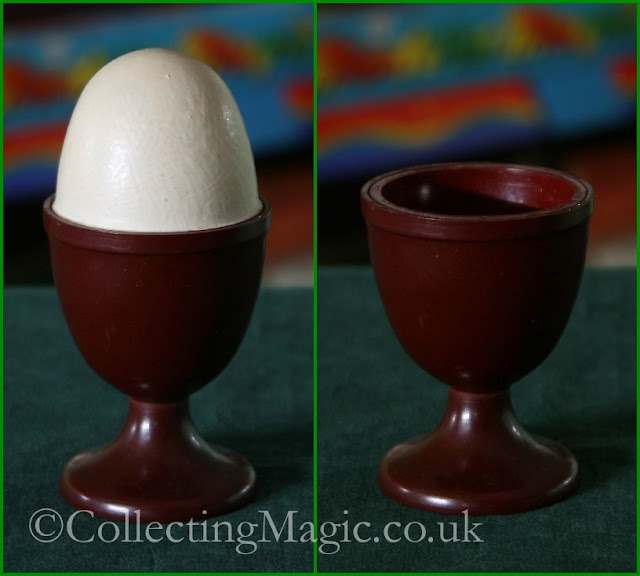 Spun metal versions of this trick were also made by a few manufacturers.

One popular trick using real eggs was the omelette pan, an effect from Hoffmann's days. With tons of potential for laughter, an egg milk mix is poured into a poor audience member's hat, only to turn into a little cake (the hat is returned unharmed). 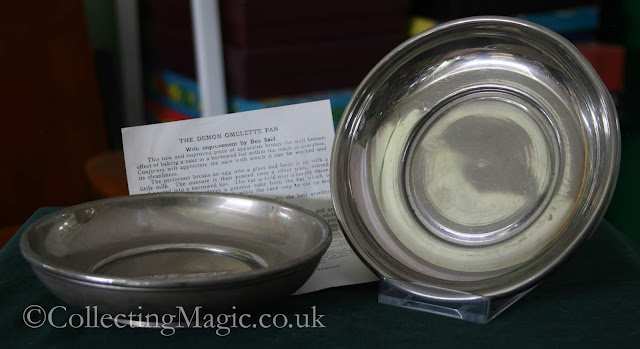 Here are two omelette pans sold by Davenports. They appear so innocent, not like showy magic apparatus at all. It must have been a really strong effect and one we'd still see today if it weren't for the decline in wearing hats.

Egg tricks were always a staple of magic sets, particularly egg bags and handkerchiefs to eggs. Here are a couple of items from Max Andrew's Vampire Magic range, the left of which was included in their sets. The eggs from mouth may have been included in their sets, but this one has its' own packaging.

To close here's something a bit different, not a magic trick, a yolk... sorry, a joke. 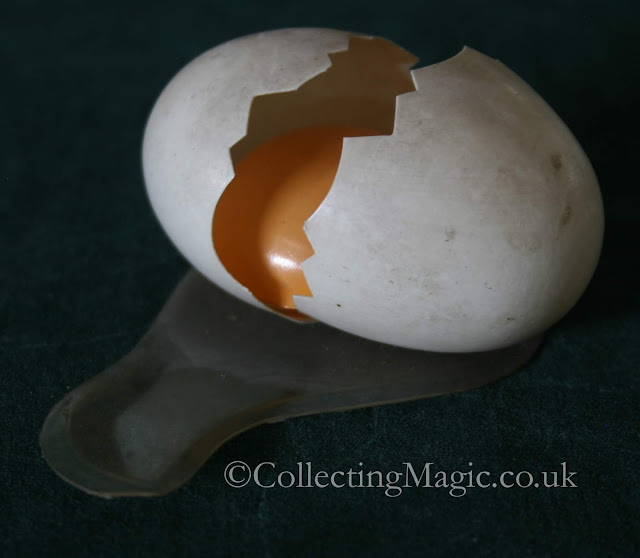 These little novelties were imported and sold by Davenports to naughty school children around the country. Here's a Davenports advert for this joke. 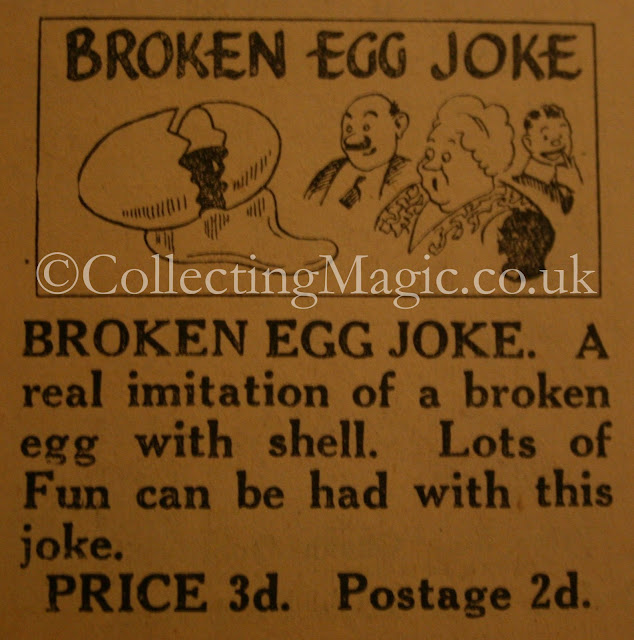 Much like the novelty spilt ink bottles of this post it was designed to be placed on a precious surface to shock the victim. I wager this would still work today even though it's a bit warped and tired.