The Mystic Bottles, a Pocket Novelty.

Pocket novelties that walked the line between magic trick and puzzle were common place in catalogues through the first half of the twentieth century. The Imp Bottles were already a long established trick as discussed in this article but there were other pocket puzzles with miniature bottles such as The Mystic Bottles. This little toy appeared in the early 1930s when small magnets were not as commonly used as today. 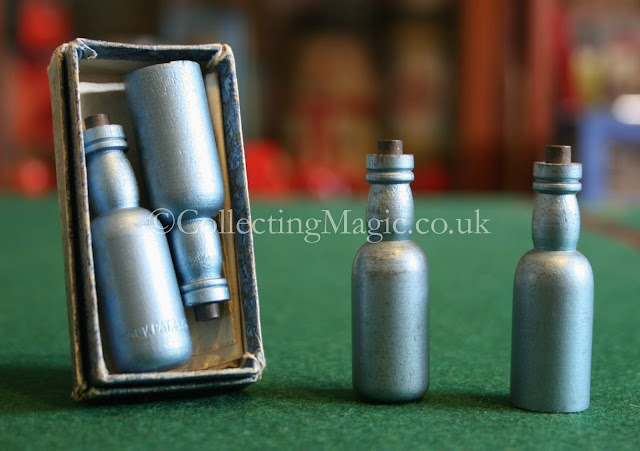 These bottles, sold as a pair, interact with each other in a range of different ways due to their magnetic corks and a magnet in the base of one bottle. One bottle also has rounded corners to its base allowing it to fall over when stood near the other. The range of different tricks the bottles can do can be seen in this advert from a 1937 Davenports catalogue. 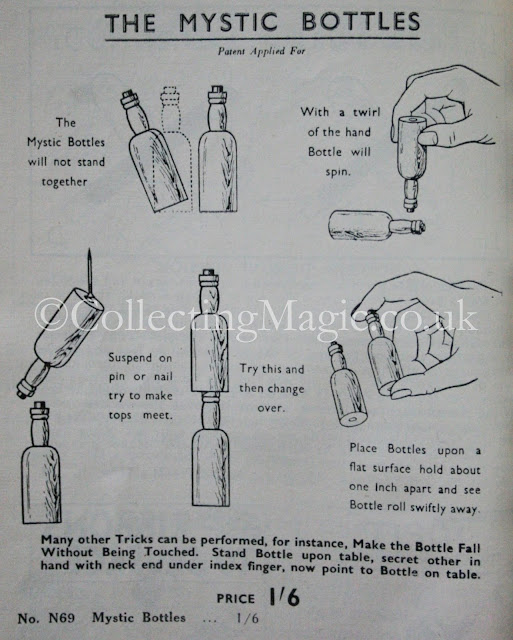 In 1937 these bottles were sold decorated to celebrate the coronation of George VI. The box was red, white and blue with labels featuring a version of the royal cypher affixed to the turned wood bottles. This set has a label on the inside of the box and a stamp on the instructions for James A. Sinclair and Co. Ltd., a London manufacturer and retailer of scientific equipment. 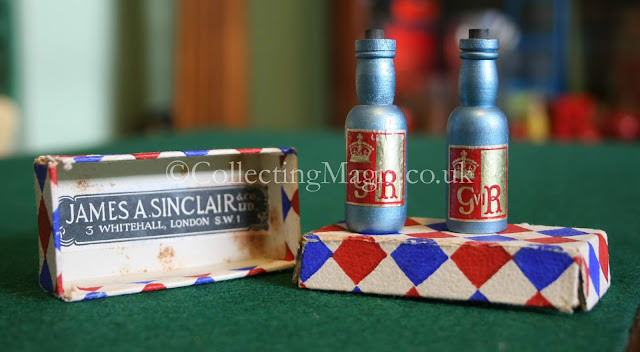 James A. Sinclair and Co. Ltd. don't appear to be the manufacturer of these bottles however. The bottles are stamped with a patent pending number, 4256/36. This patent seems to have been dropped before being fully filed however as the patent for that number is totally unrelated. The patent immediately following this number however, 4256/37, was filed and granted. This patent, filed in December 1933, was for a system to mount light pieces of scientific equipment using magnets for educational demonstrations. It doesn't seen too big a jump to assume the company who filed this patent using small magnets, W. J. George Ltd. of Birmingham, also manufactured these magnetic bottles. They were a scientific equipment manufacturer so would have had all the necessary equipment to make these and the network to distribute them with their products.

Magnetic novelties were popular during this period and it's possible W. J. George Ltd. were responsible for others on the market. Maybe they kept their name off these bottles as they were also selling more educational products and marketing "mystic" bottles may have undermined their scientific reputation.
Posted by Philip David Treece at 07:00
Labels: Davenports, Jokes, Novelty, Packaging, Puzzle, Wood
Newer Post Older Post Home