The origin of the Rice Bowls trick seems unclear, the prefix "Chinese" seems to be widespread by the early 20th century however. The effect in which a bowl of rice doubles in quantity when covered by another bowl, before changing into water is truly magical when performed well. 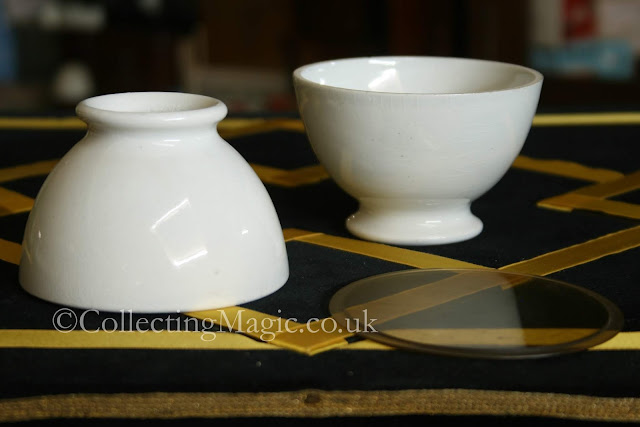 Starting with what I presume is the earliest set of rice bowls I have here’s an earthenware set. Taken from an early Gamages magic set they have a celluloid gimmick. The rice bows are the traditional shape and have been modified rather than made specifically as magic props. One of the bowls has a ground down rim to ensure a good seal with the gimmick. They're small but have the advantage of looking like normal bowls rather that specially made props. 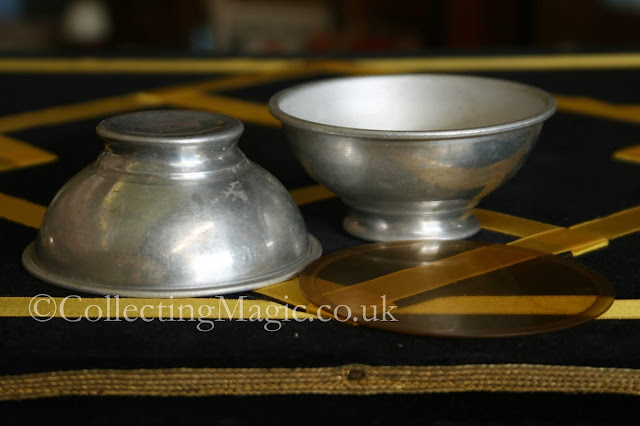 Here’s an even smaller set retailed by Davenports in spun aluminium. This set was marketed with a matching lota vase. It has a very similar celluloid gimmick to the above example and they work very well. They are a pleasing size for performing to small groups, but would be lost on the stage. Davenports sold larger aluminium sets than this and ceramic sets, indeed the earthenware set above may well be Davenports, a main supplier to Gamages, but it's hard to be certain. These bowls, along with the lota vases were among the first spun aluminium items marketed to magicians. 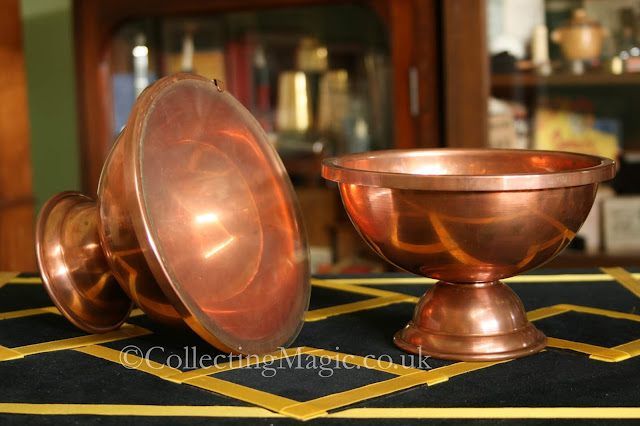 The next two sets of rice bowls were initially a mystery to me. I found the copper set first and the quality was immediately apparent. After owning them for some months I came across the original advert for these bowls in Vampire Magic’s Magic magazine. I was very glad to see they had been made by Vampire, though I would have loved for them to have been Davenports! 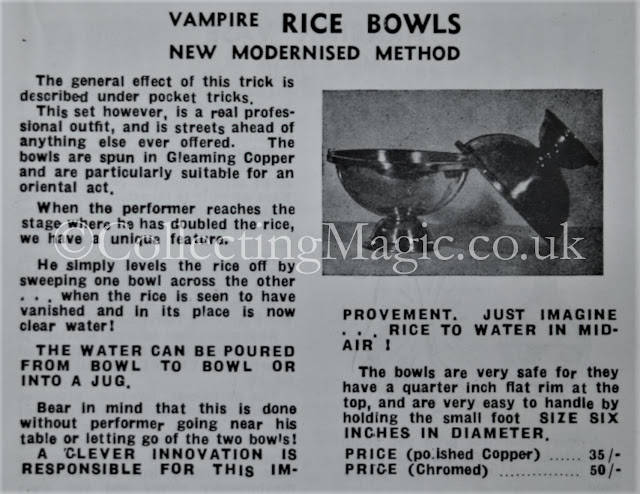 Shortly afterwards I found the same set heavily chromed as advertised above. Though of a good size and quality the gimmick is quite a simple plain disc with no lip, the bowls have an additional clip to secure the gimmick, though the handling is difficult. 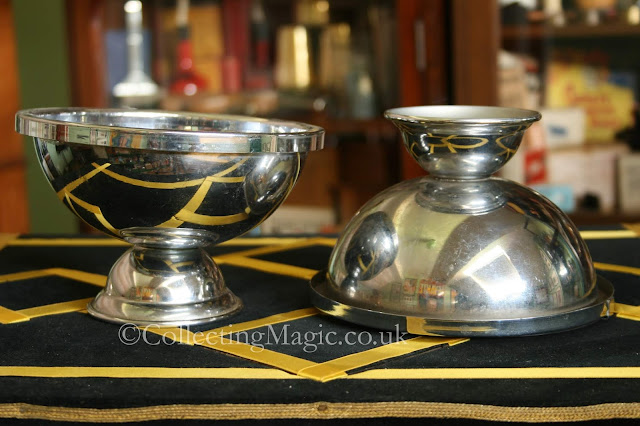 These bowls were retailed by Davenports as well, which was why I was initially confused about the manufacturer. They can be seen in many photographs of the Davenports shop and trade stall displays at conventions. They don't carry the distinctive Vampire hallmark, so maybe they were manufactured by someone else and Max Andrews distributed them himself? Here's a picture of Gilly and Wally Davenport in the shop in 1949 which shows a set of these bowls on the shelf behind them (the photo is from Furgus Roy's The Davenport Story Vol. 3, essential reading). 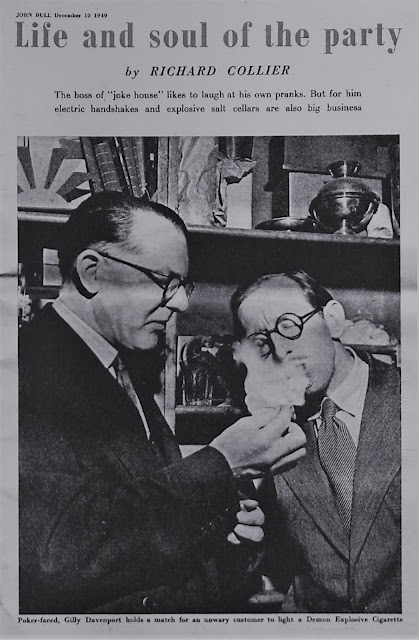 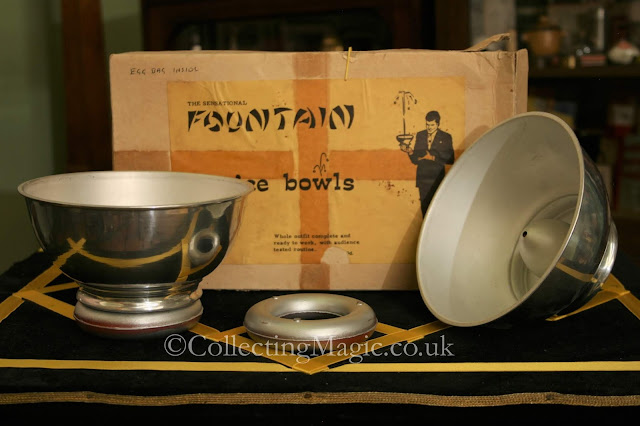 The gimmick prevents these from being placed flat on the table, so they come with silver rubber rings on which they sit. They are nicely made, but I must concede the working is extremely awkward, which may explain why they never caught on.

The final sets were manufactured in Canada by the recently closed Morissey Magic. I have very little Morissey Magic, but as a child my favourite routine to perform was their Chop Cup Combo set. They produced high quality, good value, spun metal items, predominendtly cups and balls and dove pans. This set is a copper Brahmin Rice Bowl set, manufactured in the early 2000s. 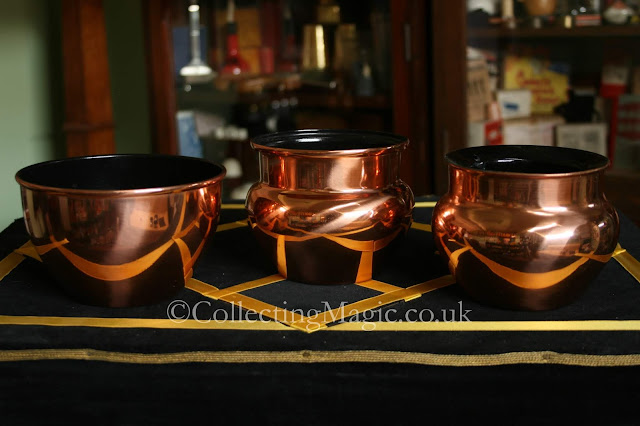 It works on a different principle to the above examples, allowing the effect to be performed without having to ditch any gimmicks. It is, in my view, the cleanest version of the bowls. They also manufactured them in spun aluminium. 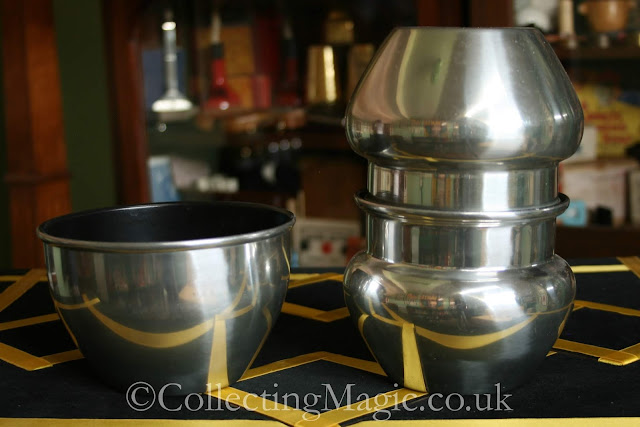 The additional bowl allows the correct amount of rice to be measured for the start of the trick and provides a neat vessel for pouring the water into at the end of the effect.

For scale here are some of the bowls alongside each other. 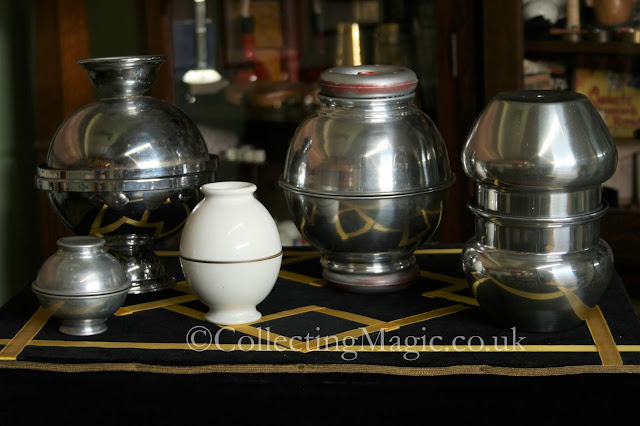